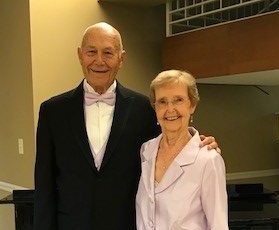 (August 1, 2022) – Conventional wisdom claims that having someone to support you during big moments of change leads to greater success. For encouragement, accountability, and understanding, a sympathetic partner can make the difference between a wish that’s merely stated and a goal that’s achieved.

One of the most impressive examples of partner encouragement we’ve heard is the long-lived exercise regimen practiced by Bob and Pat Edwards, two Abernethy Laurels residents married for 67 years who’ve walked almost daily for the past 53 years. The two 93-year-olds (their June birthdays are only 13 days apart!) began walking after Bob read a newspaper article praising the benefits of cardio exercise and decided he wanted to try it. He started to get up at 5 am each day to hit the pavement before work, and Pat followed suit shortly, although not with the same early-morning gusto Bob did. “I’m not thrilled at 5 am,” she states. Still, the two took pleasure in the physical exertion, the easy companionship, and the regularity of their habit.

While Bob and Pat allow themselves some leeway these days in the face of extreme weather, they keep walking faithfully. They also practice intermittent fasting, limiting their calories 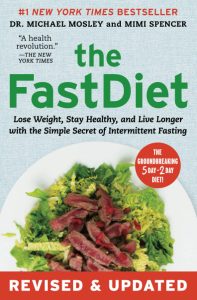 two days of every week to keep their metabolisms active and their bodies responsive. This reduced-intake fasting is said to help maintain a healthy weight and to reduce the risk of chronic disease. Pat found The Fast Diet by Dr. Michael Mosley and Mimi Spencer to be a fantastic resource, and she and Bob are longtime fans of the book’s Bacon and Butterbean Soup, frequently enjoying it as one of their day-on dinnertime meals.

In their ongoing pursuit of good health, the couple play different roles. Bob is a retired chemical engineer (his secretary preferred calling him a ‘comical engineer,’ given his quick wit), and Pat is a retired home economics instructor. As they’ve charted new courses, he’s often been the initiator and the spontaneous one; she fleshes out the ideas and helps fit them sustainably into their lives for the long haul. As Bob acknowledges, “She’s always humored me.” And while it may seem obvious that Bob would be interested in how foods impact body chemistry, especially in terms of fasting, there’s no such professional curiosity. Bob’s attraction to the meals that Pat prepares is based purely on the fact that, “He’s hungry!” she asserts with a laugh.

In response, Bob says admiringly, “Pat is remarkable…She feeds us well.” Their diet features lots of vegetables, most of them sourced from the local grocery store, and thanks to Pat’s sure hand with seasonings and culinary technique, they don’t feel deprived of flavor and nutrition on their fasting days. Although they initially restricted their calories for weight loss, they do it now for maintenance. Both are noticeably fit and trim, excellent examples of remaining active well into your senior years. When asked if they think their regimen of diet and exercise has played a role in their current good health, Bob proclaims, “Everything about our life was enhanced by doing this!”

Aside from health matters, what’s clearly evident is that the two are consummate partners in everything. They communicate easily, they support each other, and a deep love and respect underlies all their interactions. It’s a marriage that has stayed strong “in fitness and in health,” as it were. Through early mornings, through 5K runs, and through walks set at Scout’s pace, they’ve worked as a team and have stuck by each other, no matter what. And should you wonder who might have played a greater role in their decades-long health efforts, Bob is quick to dismiss such talk: “We did this together,” he asserts. And so they did.